An Ounce of Prevention


Several years ago, I finished my story “An Ounce of Prevention” about a being from the distant future who comes back to nudge humanity onto a better path with the help of a present day schlub.  At the time I was just getting into self-publishing and I didn’t know which ereader would be best, Kindle or Nook.  So I published some stories on Kindle, and “An Ounce of Prevention” on Nook.  I sold a couple copies, but it soon became clear that Kindle was the better option.  I kept “An Ounce of Prevention” on it just in case someone noticed it there, but also because I was too lazy to change it.  Eventually, last year I took it down, waited a few months, then revised the story.  Last week I then republished it for Kindle. 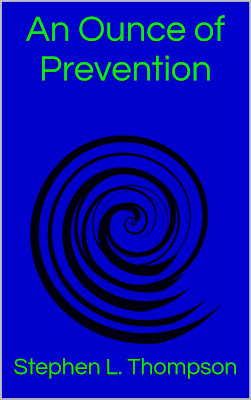 Jason took a step back, and collapsed into his beanbag chair. For ten or fifteen seconds he just stared at the woman. Shaking his head, he asked, “Do you have a name?”

“You lack the organs to ‘speak’ let alone ‘hear’ my name.”

The woman frowned. “Does it matter?”

Jason thought for a moment. Finally, he said, “I think I’m either okay with or just ignoring the fact that you’re not … human. But I think not having a name to call you bothers me on a … primal level, maybe, something.” He finished with a mumbled, “I don’t know.”

The woman nodded. “What would you like to call me?”

Jason looked over at his bookcase and on the second shelf down a tome by Tolstoy caught his attention. “Anna?” he asked.

She moved some books off a chair and sat down facing him. For a second he was engrossed by her legs. He shook his head and looked back to her face. “Uh, do you want me to … take you to my leader?”

“If I wished to speak to your President, I would just walk into the White House.”

“The Secret Service would probably stop you.”

A shiver ran down Jason’s back. He sat up straight and asked, “Why have you come to me?”

“I believe you may be of some service to my mission.”

“The salvation of the universe.”

It was several attempts before Jason could speak his question, “I could save the universe?”

Anna shook her head. “No. I could wipe out your species and the universe would not notice. My mission is to try to save several million insignificant species in the hope that collectively you’ll make a difference.”

If that sounds at all interesting, I hope you’ll check it out.

Posted by Stephen L. Thompson at 2:00 PM No comments:

Thoughts on Star Trek Beyond


So it’s been a week or so since I’ve seen Star Trek Beyond, but it took some time for my thoughts on it to jell.  My initial reaction was that it was okay.  Better than Into Darkness, but that’s like saying The Force Awakens was better than the prequels.  But as I’ve thought about it, the more issues and problems I realized I have with it.

To begin, I’m not a fan of this … timeline, whatever you want to call it.  I’ve always maintained that if they wanted a new series set a hundred years after TNG following the Enterprise H or whatever, I would have been perfectly fine with that.  Well, as long as the stories were good.  It would have made money because of the Star Trek name, but it wouldn’t have had THE Star Trek names of Kirk, Spock, etc.

A lot of people dismiss people like me by saying, “They’re just unhappy because it’s not their Star Trek.” But for decades and for a hundred or so hours of TV and movies, Kirk was Shatner not that … other guy.  Shall we compare “The City on the Edge of Forever,” “Let That Be Your Last Battlefield,” “Mirror, Mirror,” “The Trouble with Tribbles,” and The Undiscovered Country with … Beyond?

Yes, these new movies aren’t my Star Trek, but they try which mucks everything up.  For example, for Into Darkness they locked themselves in the Khan closet instead of doing something original.  If Into Darkness had just been about a disgruntled Starfleet operative wanting to take down Starfleet for personal reasons it … would have been more like Beyond.  While that’s an improvement, they’re still locked in the TOS apartment.  Imagine if this had been a new franchise.  You could have had a competent, Andorian female captain, a wise-cracking, Hispanic XO, a dour doctor fighting personal demons of some kind, other new and interesting characters.  It could have been opened up to so much, but instead we get grouchy McCoy arguing with Spock because that’s what my Trek did.

This idea of we’re new, but we’re also old is one of the reasons I had issues with the first film.  As I watched Vulcan be destroyed, my thoughts were They’ve already done time travel in this movie so they’ll just go back in time at the end to fix that.  But they didn’t.  Part of it – I assume – was to show they’re new bold, gritty timeline.  However, there was Old Spock.  You know, the guy who from memory – not long after being dead – calculated how to fly around the sun to time warp to go pick up some whales to save the planet of his mother.  Apparently, he never considered doing that to save the planet of his father.

I think my main issue with this timeline is that trying to have it both ways, the “we’re going to do bold new things, but first we’re going to lock ourselves into this apartment and limit ourselves.” To some this is really Star Trek, but to me, it’s just expensive fan fiction.
Posted by Stephen L. Thompson at 11:00 AM No comments: