I never thought I’d see Obama handing off to the next President.  Not because I’m a conspiracy nut who thought that Obama was going to rip up the Constitution and declare himself King, but because when he was elected in 2008 I thought there was a 99% chance that he’d be assassinated in his first year.  I did not expect him to live through his first term, let alone a second.  I don’t know if it was because the Secret Service did such a good job protecting him, or if the anti-Obama people were just talk.  I wonder if the Secret Service kept a list of idiots who threatened Obama just so they’d sound tough to the other anti-Obama people.  I also wonder if there were bars that would give people a free drink if they were investigated by the Secret Service for tweeting “death to Obama” or something.

I really started thinking about this four years ago when Obama’s first term ended, but I didn’t want to say anything at the time for fear of giving people ideas.  And I’ve been thinking about it a lot lately because, well, it’s the end of his second term, but also because my feeling of certainty that Obama would be assassinated is matched by my feeling of certainty that Trump will be impeached.
Posted by Stephen L. Thompson at 10:00 AM No comments: 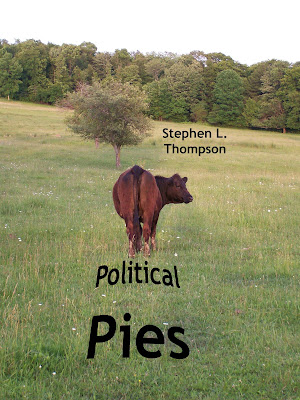 I first published Political Pies, my collection of short stories with a political theme, in the early fall of 2012.  Besides hoping that people would buy it and I’d make some money off of it, is the hope that my stories would spark an idea and readers would reexamine some of their political beliefs.  Therefore, it made sense to get copies to as many people as possible.  Which is why since then I try to have it free to download on elections and the Fourth of July.  I think sometimes I forget, but I try to have my free promotions linked to some political/national event.  Which is a long winded way to say that to mark the Inauguration tomorrow, you can now download the Kindle version of Political Pies through Sunday.  So if you haven’t already, grab your free copy now.

Posted by Stephen L. Thompson at 3:00 PM No comments:


Years ago, I worked the midnight shift at a gas station off the interstate outside a small town.  The town basically shut down at night.  Many nights I’d go down main street without any other cars, not even parked ones.  But there were other nights I’d get stuck at a red light that was on a timer.  I’d sit there for over a minute almost screaming, “There’s no f---ing point to this!” But if I lived in a world where everyone had an autonomous car, the car would get on the self-driving chat network and ask, “I’m approaching Intersection 15743486N.  Is anyone else approaching it?” When it found out no one else was coming, it would just zip on through; no fuss, no muss.

Of course, that makes sense for intersections in the middle of the night in a dead town.  But what about intersections with lots of traffic?  Currently, the north/south lanes stop so the east/west lanes can go.  But in a world where all the cars can talk to each other, they’d work out the timing so that there would be gaps in front of and behind every car that would be wide enough for the cross traffic can go through.  At first, these gaps would be rather big because if you’re zipping along at 50 mph and another car passes in front of you with just inches to spare, it would give many of us old-timers heart attacks.  But as the generations got used to the idea, the gaps would become smaller, until cars passing within inches of each other became normal.  Or maybe, instead of windows we’ll just have screens so we can watch movies as we’re driven to where we’re going.

What about pedestrian crosswalks, you ask?  If you’re redesigning a city to take into account autonomous cars, then you’d probably have pedestrian only zones and to cross out of these there would be bridges over the roads.  Or the crosswalks may end up on a timer and all the cars would factor those in as part of their route selection.  Thinking about that, that might be a tad eerie.  You’d be walking up to a crosswalk and cars would be zipping by, then the crosswalk light would come on and the traffic would just disappear, as the cars turned a block away to go around this crosswalk.  You’d cross the street, and after a couple minutes, the crosswalk light would go out and the traffic would all come back.  On one hand, a testament to coordination, but on the other hand that seems so unlike what people in cities are used to, that it would take time to accept that as the new normal.

***
An earlier version of this post appeared on Persona Paper in March 2015.
Posted by Stephen L. Thompson at 1:00 PM No comments: