I have this habit – whenever I read or watch something set during some historic period – of wondering what I would do if some time portal opened and sent me to that time.  (Like the stuff that goes through your mind to pass the time makes sense.)  Basically, it’s a fun, mental exercise.  Like, if I ended up in Ancient Greece, how could I explain where I was from?  Assuming I appeared in a ball of lightning or something in front of people and wasn’t a strangely dressed barbarian found roaming the countryside who would probably just be speared.  Or what if I ended up in London – or Berlin – in 1940?  As a general rule of thumb, I’d try my best not to change the course of history.

For the longest time one of the more popular versions was if I ended up at a plantation in the South in 1860.  So they would know there’s something odd about me, I’d hope to show up above their dinner table while the family was eating.  I’d beg forgiveness, and ask for their discretion.  And as a white guy, hopefully they’d treat me okay.  (I’m ignoring the whole slavery issue because, well, getting into that now kind of sidetracks the entire point of this post.  Also, it’s rather pointless for me in the … comfort … of 2020 to state categorically what I would say to slave owners if I was magically transported back 160 years.)

I spent a lot of time wondering how much I could tell them of the future.  Like, I’m sure the womenfolk would want to know what the latest fashion was, and my best response was to say that they would consider the future fashion scandalous.  I might even say, “There are these things called bikinis – which women wear at the beach and swimming – that are made with less material than this,” and then I’d hold up a napkin.  Of course, that might make the mistress of the house faint from shock.

Anyway, to get to the point of this post, I would imagine that the white family members of this house – not having TVs or Netflix – would be well read.  They might ask my opinions on the “new” book A Tale of Two Cities, which I have read but I don’t remember much of it.  They might also ask me what I think of Ivanhoe, or some Greek philosopher, and I’d have to admit that I’ve never read them.  So they would probably think of my as an uncouth Yankee – okay, true – but I wanted some way to redeem myself.  And so I came up with the idea of “Half our Knowledge,” which shows that I have access to far more culture than they did.

If you made a graph of what humans know vs. time, you’d see that the Total Human Knowledge increases over time.  At first it was basic things like which plants we can eat and how to make fire, then it advanced to making pottery and boats, and now it’s reusable rockets and dating apps.  But there’s also poetry and plays and movies.  Now this is extremely rough, because what counts as a “unit of knowledge?” Does The Tragedy of Hamlet, Prince of Denmark have the same weight as Thor: The Dark World?  (Shakespeare wrote about forty plays, which is about as many superhero movies released in the past fifteen years.)  And this also ignores lost knowledge, like all the ancient books that all we have are their titles.  But if you ignore all of that, then you realize that there was a point in time that had half the knowledge we have here in 2020.  When was that? 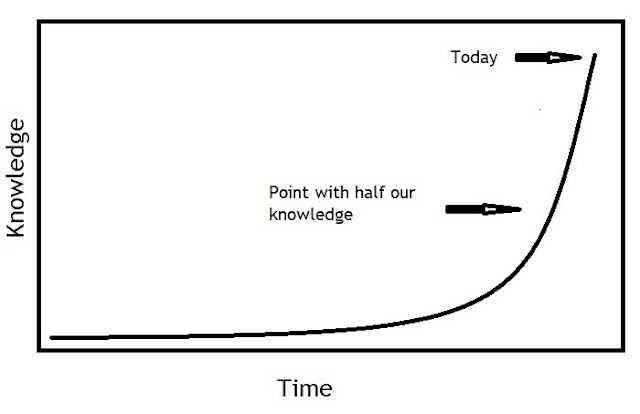 When I first thought of this idea, my knee-jerk answer was 1900.  That was before flying (1903) even before sliced bread (1928).  But as I thought about it, I moved my answer to 1940.  Because a lot of stuff we don’t think twice about – jets, computers, nuclear power – all came about during World War II.  But once I thought of computers, that really threw everything out of whack.  And it comes back to the problem of what counts as a unit of knowledge.  How does “Eating that green berry will make you sick” compare to the trillions and trillions of calculations a supercomputer does modelling how a protein folds up, which could fully explain why that green berry makes one sick?

And then there’s all the social media stuff.  Like, how many equivalents of The Iliad are tweeted each day?  And before you say that what some asshole says online shouldn’t count as knowledge, I have to ask what did the average peasant think of Robert II of France?  He was the King of the Franks a thousand years ago.  The answer is, they probably thought he was swell, because if they said otherwise some nobleman would cut them in half with a sword.  But unless some literate peasant wrote down what they thought or some clergyman asked them what they thought and accurately recorded it, we have no idea.  But the historians a thousand years from now – assuming they can still access the data – will have millions and millions of tweets, blog posts, YouTube videos, etc., of people voicing their thoughts on Trump.  So shouldn’t the rambling Facebook post of your crazy uncle be counted as, in some sense, knowledge?

Given that we now have supercomputers finding all sorts of tidbits of knowledge and that there are seven billion humans reading over all our old knowledge and making new stuff every day, could it be possible that the “half our knowledge” point was a recent as … 2000?  And I know it sounds ridiculous to try to balance making the wheel, domesticating cows, and creating plastics to what has happened in the last twenty years, but in 2000 Pluto was basically just a point of light, now we have maps of it.  In 2000, YouTube wasn’t a thing, and now how many billions of hours of videos have been made?  In 2000 I had only been writing for a few years, now I have several ebooks to my name.

There is no right answer to when we had half our knowledge, but it’s a question that the more you think about it, the deeper down the rabbit hole you go.  A reference that hypothetical family in 1860 wouldn’t get since Alice’s Adventures in Wonderland didn’t come out until 1865.